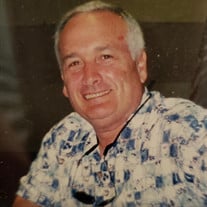 Richard Sydney Cowan, born August 1, 1944 Los Angeles, CA passed away peacefully Monday, January 31, 2022 in Murrietta, CA. Richard was born to Phillip and Rochelle Cowan and has one brother, Stuart. Richard lived in California most of his life, except for a few months of basic training and service in the Army in Washington State. Richard met his wife Sue and were married on Valentine’s Day on February 14, 1975 and they had a daughter, Colette, in September 1976. Richard went to UCLA and graduated with a Bachelor’s of Science in Psychology. He was in the fraternity, Zeta Beta Tau and completed ROTC training. He was a proud UCLA alumni. He served in the army for a short time before being discharged due to an injury. Then he went to Grad School for his Master’s Degree, in Business Administration at Cal State University Long Beach. Richard worked for 45 years in the grocery and union industries. He started off in the grocery stores as a teen to then serve as a union representative and Secretary-Treasurer at UFCW Local 1442 in the South Bay. Richard is survived by his wife Sue, daughter Colette, son in law Scott, granddaughter Lana and brother, Stuart. Richard enjoyed traveling the world with his wife and daughter, playing golf, watching all sports, especially Brooklyn/Los Angeles Dodgers’ baseball and UCLA college games, listening to music and watching stand up comedy. He loved animals especially, his grand dogs, Spike and Hazel. Richard admired legendary UCLA college basketball coach, John Wooden. He was blessed to attend UCLA when Kareem Abdul-Jabbar played and witnessed 3 National Championship Titles. John Wooden once said, “Seek opportunities to show you care. The smallest gestures often make the biggest difference.” This exemplified Richard. Whenever he had the opportunity to help someone, he did. He went above and beyond to make them feel valued or special. He was a believer in our Lord and Savior, Jesus Christ. He truly exemplified the meaning of a true Christian, showing love, empathy, and compassion for others. A Go Fund Me page has been set up named, In Memory of Richard Cowan. There will be a private family service on Monday, February 14, 2022 (Richard and Sue’s 47th wedding anniversary) and will be laid to rest at El Toro Memorial Park in Lake Forest, CA.

The family of Richard Sydney Cowan created this Life Tributes page to make it easy to share your memories.

Send flowers to the Cowan family.