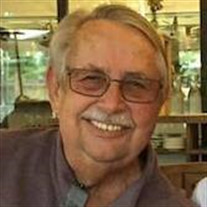 Richard Glenn Hart born June 22 1941 passed away in his Lake Forest home on Wednesday October 20 2021. Richard, better known as Dick, Dicky and Poppy to those who loved him, was a California Native. Richard attended Downey High School and went on to be part of the sheet metal workers union for 25 years. He later started his own company called SweetHart kitchen equipment. He was highly respected as a perfectionist in his field, but was most proud to use his skills volunteering to help build houses for destitute families in Mexico. An avid collector, a hobby he shared with his father Glenn Hart, Richard collected vintage coins, stamps, sloganed t-shirts, western movies, guns, and fishing poles. Richard's most prized collection was of course his British born bride of 50 years, Helena Patricia “Patti”, his son Ken Hart (Ronnie) , daughter Julie Green (Scott), and his grandchildren Brittanie, Brandon, Brody, Brooke, Jennifer and Amanda. Dick was a tried and true American, a proud lifetime card carrying member of the NRA and of Saddleback church. He was a faithful friend who you could always count on to show up and be there for you. With his easy-going, friendly swagger, and sarcastic wit, he shared tongue in cheek sayings, smiles, and laughs with family, friends, waitresses, walkers passing by, and anyone else who sometimes isn't seen but he made a point to never ignore. Known for being the fixer of anything around the house, he was always ready and willing with a set of tools or handy pocket knife to come to the aid of a friend or family member. In his later years, Richard became known as “Poppy” to not only his grandchildren, but their friends, neighborhood kids, and all those who looked up to him as the fun loving, caring, and sometimes cheeky grandpa. He loved spending time with his grandchildren, taking them on road trips, playing silly games, teaching them to fish, or shoot a gun, he was always willing to offer support, and often showed his love with a great meal of his legendary BBQ ribs. A modern cowboy, Dick enjoyed taking road trips and exploring beautiful sights across the country, visiting almost every National Park in his well-loved and trusty Sequoia. From his travels, he knew the name of almost every interstate exit and town across the USA. Richard loved the ocean, deep sea fishing, cookouts at the beach, and cruisin’ on his boat in Lake Havasu. After he retired, he often spent his days people-watching at Dana point harbor but would never miss his treasured time with his friends at “Coffee club” in the afternoons. He treasured his family and friends above all else and always made time to nurture these relationships. He will be dearly missed but we are certain that he will be overjoyed living in his new dwelling place, reuniting with dear old friends and family. To honor and celebrate his life a memorial service will be conducted at 11:30 A.M, Friday, November 5, 2021 at SaddleBack Church in the Plaza room. Please note parking will be a distance from the service location. In lieu of flowers, donations to Samaritan’s purse or Tunnels to Towers, https://t2t.org/donate/ would be appreciated. For additional details on the service and memorials please see https://www.mccormickandson.com/obituaries/Richard-Hart-17/.

Richard Glenn Hart born June 22 1941 passed away in his Lake Forest home on Wednesday October 20 2021. Richard, better known as Dick, Dicky and Poppy to those who loved him, was a California Native. Richard attended Downey High School and went... View Obituary & Service Information

The family of Richard Glenn Hart created this Life Tributes page to make it easy to share your memories.

Send flowers to the Hart family.