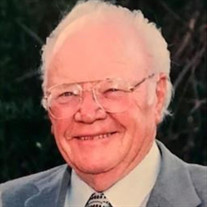 Robert Emerson Alderman, Sr., having confessed Jesus Christ as his Lord and Savior, passed into the eternal glory of God on July 29, 2021 in Mission Viejo, California. He was 97 years old, survived by two children, seven grandchildren and thirteen great grandchildren and one sibling. He was born in Nebraska in 1923; served in United States Army in WWII as part of the Greatest Generation in the European theater. Shortly after the War, he was honorably discharged and obtained a Bachelor of Science degree in Physics and Mathematics from Hastings College under the GI Bill while also working as an auto mechanic to support his wife and children, becoming the first of his family to obtain a college degree. After graduating from college in 1953, he moved his young family to Albuquerque New Mexico to take a position as an Engineer in the defense industry; followed by promotions and moves to Pennsylvania and then to Southern California where he was attributed for personally designing a 100% rotating solenoid stepping switch for the Atlas Missile on behalf of the Aerospace company he was working for at the time. Tired of having had to uproot his family so frequently, he ultimately chose to be independent and self-employed in the field of casualty insurance sales; obtained several licenses in that field and established his own agency until he retired at the young age of 58 to have more time to play golf and pursue his many other interests and hobbies. Memorial services will be with his immediate family only. In lieu of flowers, the family requests anyone wishing to express their condolences or wishes to honor the life Robert led, please consider making a donation in his name to the DAV (Disabled American Veterans). Donations may be made online (www.DAV.org) or by mail (DAV - PO Box 14301, Cincinnati, OH 45250. May all who knew him be blessed by the memories of their best times with him while he was living - as gifts from God. We love you Dad! Thank you for always setting the bar high and always being there for us. We miss you! Bob Jr., Barb and families. • * * * * Individual words of love for Robert and/or special times/memories you shared with him can be expressed through his on-line, memorial website using this link: ___https://www.mccormickandson.com/obituaries/Robert-Alderman-

Robert Emerson Alderman, Sr., having confessed Jesus Christ as his Lord and Savior, passed into the eternal glory of God on July 29, 2021 in Mission Viejo, California. He was 97 years old, survived by two children, seven grandchildren and thirteen... View Obituary & Service Information

The family of Robert Emerson Alderman Sr. created this Life Tributes page to make it easy to share your memories.