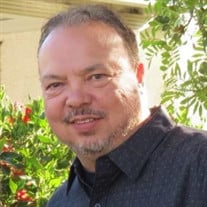 Robert Glen Pinarija passed away at age 54 years old. Robert spent his last days in Corona, California. He passed away on the morning of June 7, 2021 at 8:58am in his home. Robert Pinarija was born on February 26, 1967 in Downey, California. Robert Pinarija’s parents are Huiberta Pinarija and Gerard Pinarija and his siblings are Richard Pinarija and Silvia Ball. Robert graduated from Cerritos High school. During his time as a young kid he was very athletic and spent his time playing sports; his favorite being cross country. He continued his passion and competitiveness by winning awards and even helped his teams go to CIF in cross country. Robert started working for automotive car insurance, then moved on to becoming an automotive finance manager, and lastly he was a loan officer for automotive. Robert was a strong, hardworking man that had spent many countless hours in the office. He had met many friends throughout his workplace with him being a talkative and approachable man. Robert loved exploring the world, being out with nature, and traveling with his beloved wife and daughter. He absolutely loved spending his time on the beach. Robert also had a passion for food and exploring different cultural cuisines. Robert spent most of early life not believing in anything, he just knew there was a God but never understood what that meant for him and his life. When he had found out that he had health and heart problems, he totally changed his life around for Christ. He got planted into a church and gave his life to God. He changed to this Godly loving man that put Him in the center of his life. He was baptized by Pastor Derek Dunn on April 15, 2018. Ever since then, his spirit and happiness spread throughout others. In March of 1994, Robert Pinarija met Eileen Pinarija. He married the love of his life Eileen on April 3, 1999. He had only one daughter named Savanna Pinarija born on June 8, 2003. Robert loved his wife and daughter unconditionally just like Jesus Christ loves us unconditionally as well. However, Robert’s heart did not just stop there, as he had much love for his family. Robert Pinarija’s services will be held on June 19, 2021 at 4pm at McCormick and Son Mortuaries. Address: 25002 Moulton Pkwy, Laguna Woods, CA 92637. Please feel free to call Eileen Pinarija at (949)-266-7989 for any questions or condolences. If you feel inclined to help Robert Pinarija’s spouse and daughter with funeral expenses and help with them getting back on their feet. Donate at https://www.gofundme.com/f/robert-pinarija-rest-in-peace-fund?utm_campaign=p_cp+share-sheet&utm_medium=copy_link_all&utm_source=customer

Robert Glen Pinarija passed away at age 54 years old. Robert spent his last days in Corona, California. He passed away on the morning of June 7, 2021 at 8:58am in his home. Robert Pinarija was born on February 26, 1967 in Downey, California.... View Obituary & Service Information

The family of Robert Glenn Pinarija created this Life Tributes page to make it easy to share your memories.

Send flowers to the Pinarija family.