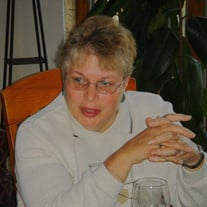 Roberta (Bobbi) was born on November 16, 1942 in New Haven, Connecticut. She passed away in the Providence Mission hospital in Mission Viejo, California on July 17, 2021 due to complications of Parkinsons Disease. Bobbi graduated from the University of Connecticut in 1964 with an RN degree. She started her career in home health working in an experimental program at Yale New Haven hospital. She was urged by a friend to go to California to start a job at the Alta Bates hospital in Berkeley. After considerable thought and family advice (“you can always come back!”) she decided to go. Starting in 1972 she managed the hospital’s emergency room for several years and then moved on to other work in the field of home health. She finally landed at the clinic for Rossmore Liesure World - Walnut Creek, California – where she created and managed a home health care agency. Along the way, Roberta met and married Robert Eldridge (that’s right, Bob and Bobbi) in 1977, buying a home in Lafayette, California where they lived for the next 17 years. At the time, Bob was CEO of a credit union in Berkeley. In 1981 he left the credit union and began a new career as a full time credit union consultant. He also created and wrote a PC software program for credit union management. Over the next 10 years, that program was reasonably successful with some 1000 credit unions as clients. In 1990, Bobbi was looking for a change. At the same time, Bob needed help for his work. He took the monumental step of “hiring” Bobbi. She was instrumental in helping and keeping clients, planning and managing educational sessions for them, and keeping the non-technical chores up to date. By 1999 the work was becoming more than the two of them could handle. They sought, and found, a buyer for the business and committed themselves to work with them for 2 years and then retire. Bobbi and Bob retired in 2001. Also in 1999, Bobbi was diagnosed with Parkinson’s Disease. During the next few years her Parkinsons was barely noticeable. As time went on, however, she became weaker and walking became more difficult. In the past few years, she spent much of her time in a wheelchair and required assistance with many tasks. Travel was always a favorite activity for Bobbi and once she had retired she had more time for that. That, and her love of cats. She travelled frequently for business, took cruises, and bought a condominium on Maui to which she went at least once a year. She also played a lot of bridge and made many friends at the bridge table. She was always ready to go out to dinner at nice restaurants, too. Upon retirement, she moved (with Bob, of course) to Palm Desert and lived there for a dozen years. She then moved to a home in Coto De Caza in Orange County, south of Los Angeles. A little more than 2 years ago she moved again (with Bob) to a Senior Living residence in Laguna Hills. As her condition worsened, she ultimately was hospitalized and passed away while there. Bobbi will be interred in her family’s plot at St. Lawrence Cemetery in West Haven, Connecticut. A short service for family will be conducted at the gravesite. In the near future, a “celebration of life” will be scheduled in Orange County.

Roberta (Bobbi) was born on November 16, 1942 in New Haven, Connecticut. She passed away in the Providence Mission hospital in Mission Viejo, California on July 17, 2021 due to complications of Parkinsons Disease. Bobbi graduated from the University... View Obituary & Service Information

The family of Roberta Eldridge created this Life Tributes page to make it easy to share your memories.