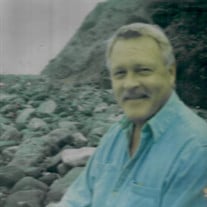 Ron W. Edwards passed away on Thursday, July 15th. His burial will take place on Wednesday, July 28, 2 PM at El Toro Memorial Park in Lake Forest, California. Ron, mi Viejo, was born in Chitenango, New York – birthplace also of L. Frank Baum, the author of the Wizard of Oz. Ron’s proudest accomplishment was owning and piloting a hot air balloon. One fine day in May, 1980, he flew from Chitenango to Dallas, Texas to find his Dorothy. From that day forward Ron and Dorothy (Peggy) were forever united. Ron fathered Christian with Peggy, and Bonnie and Greg with Barbara (his previous wife). Greg died in 2020 – truly breaking Ron’s heart. Ron and Barbara’s daughter Bonnie gave birth to Eddie Barton, Ashley and Vinny Butera. Eddie fathered three daughters, Kayla, Aria and Elizabeth. Ashley birthed four daughters: Kalashia, Kasialah, Ka’jiera, and Ki’arra. He also helped raise two stepsons, Peggy’s son, Steve Sandusky and Barbara’s son, Bradd Dietz. He was a construction inspector, project manager, party chief and surveyor. Several iconic buildings in Southern California, such as the Ziggurat, bore his inspection for perfection. He was a musician par excellence. He read music as well as played by ear – a rare talent. He played banjo for four bands, but he also played the piano, guitar, ukulele, accordion and harmonica. He was a music instrument collector. He was his high school’s lead trumpetist. Ron and Peggy loved to sing together in his twilight years. He could have forgotten what he did five minutes ago, but he never forgot a word from his many favorite tunes. As a younger man he enjoyed gold prospecting and even took Christian to Alaska on a prospecting mission He also achieved a small plane pilot’s license. He enjoyed target shooting with Christian. He loved his home in San Juan Capistrano, near the ocean, where he and Peggy mediated many a Sunday. He was an insatiable reader, history buff and Civil War specialist. His favorite TV program was “Jeopardy.” Crossword puzzles were his specialty. Ron loved his pets – our first dog was our amazing guardian German Shepherd, Gretel. Next our beloved American Eskimo, Kaysha. When we moved to Laguna Woods Village, seventeen years ago, we switched to cats: Karma, Bootsy and Chula, with whom he communicated fluently and whose coats shined from his petting. Ron and Peggy were married for forty years. “He was a good man, always faithful, and an excellent provider. We were a superior partnership. Not a day went by that he didn’t call me beautiful and we both added, ‘I love you.’” Ron was forever generous, he would U-turn to give to a beggar. In memory of Ron, give generously to street beggars, because, to Ron, they were the neediest. Also, in his name you may donate to his favorite charities: “The Southern Poverty Law Center,” “Doctors Without Borders,” and “St Joseph’s Indian School” and “The Red Cross.”

The family of Ronald Wayne Edwards created this Life Tributes page to make it easy to share your memories.

Send flowers to the Edwards family.