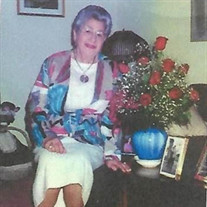 Rosaura “Rose” Martin Miller was born June 17, 1924, in Santurce, Puerto Rico. She passed peacefully on Saturday, April 24, 2021 in her Laguna Woods home, surrounded by her immediate loved ones – daughters Janice and Mercedes, granddaughter Kristina, great-grandchildren Gabriel, Elena and Sofia, and dearly loved caregivers Lucy and Ritchie. Born to Bernardo and Dionisia Martin, Rose had four siblings: Ana, Iris, Erasto, and Newton Martin, all of whom predeceased her. Rose enjoyed a happy childhood and youth. She met Orville at age 18 in 1942 in Puerto Rico when he was in the Navy. Rose’s sister Iris introduced them while at a dance at a prestigious ballroom called Casino de Puerto Rico. They were engaged for two (2) years while he was abroad serving in the Navy and were scheduled to be married in Florida upon his return. However, Orville was suddenly transferred to Oklahoma City, OK. Rose traveled on her own to meet him, flying out of Puerto Rico alone for the first time ever. She flew to Miami, FL, and from there took a train to Oklahoma City. Rose and Orville married on December 22, 1944, when Rose was 20 and Orville 23. They moved to Jacksonville, FL in 1945. Rose and Orville were a solid team as he finished his naval career in Florida, and both their sons were born there, Orvil, III in November 1945, and Wallace (Wally), in January1947. In early 1948 the family moved to Puerto Rico. While Orville began an illustrious 30-year career with the Federal Aviation Administration (FAA) in Isla Verde, Rose was very involved not only with her family and friends but also in many civic and philanthropic endeavors. Then on June 11, 1953, the Millers welcomed the arrival of their daughter Janice. A few years later, Rose established a daycare center at her home. Many of the neighborhood children as well as the ones from her daycare kept in touch with her throughout their lifetime because she was deeply loved and acknowledged to be instrumental in their lives. Upon Orville’s FAA retirement in June 1977, the Millers moved to Orville’s hometown of Hardinsburg, Kentucky - a small, rural community - to care for his elderly parents. Rose and Orville had a home built on a large spread of land next to them. During the 25 years Rose spent in Hardinsburg, she became, as she would state, “a Puerto Rican with a Southern accent.” As she grew to be a pillar of the community, in turn, she was loved and embraced by them as one of their own. Always available for whomever needed help in any way, she freely showered all with her kindness and generosity, as well as her savory Puerto Rican cuisine and humor. She was referred to, in jest, as the unofficial mayor of Hardinsburg. She volunteered at the local hospital and courthouse as interpreter for monolingual Spanish speakers in the area. In Hardinsburg, Rose also helped raise her two (2) oldest grandsons, Karl and Mark Miller. Rose adored and was very proud of all her grandchildren, for whom she provided infinite opportunities to enjoy life on the farm. Starting in the mid-1980s, Rose and Orville took annual trips to Laguna Hills, California, to visit and spend quality time with Janice and her family. Always spending their wedding anniversary and year-end holidays there, they frequently returned a second time during spring or summer, which facilitated their establishing strong, long-term friendships and connections on the west coast. As the Millers were aging and Janice needed to provide more immediate care and physical support to them, they moved to Laguna Woods in January 2002. They accessed many of Laguna Woods’ amenities, including but not limited to social and recreation activities. Rose was quite the dancer and the proverbial “life of the party,” dearly missed if she was absent at a weekly happy hour and/or Friday night event. She was a very active swimmer, and walker, and a healthy lifestyle served her well as she nearly reached age 97. She was great cook and enjoyed eating all variety of foods, particularly desserts and especially all things chocolate. Rose lost Orville on April 5, 2009, just shy of their 65th wedding anniversary. She continued to live under Janice and Mercedes’ watchful care while at her Laguna Woods house, where she still enjoyed all activities with friends and neighbors. Rose spent much time at Janice and Mercedes’ home. Just as they did while Orville was still alive, Janice and Mercedes frequently took Rose to Arizona to visit Kristina and her family, and included her in most of their road and domestic trips up until the last few years when her health impeded travel. Rose is survived by her three (3) children Orville, III, Wally, and Janice, as well as her dear Mercedes Julian, Ritchie Borras, and Lucy Prietos. She will also be greatly missed by her nine (9) grandchildren and dear Rafael Rivera, and Elan and Miluette Matlovsky; 13 great grandchildren plus one more on the way; and numerous friends, all of whom cherish memories they created together. Dear loved ones: Please note that Rose Miller’s graveside service is scheduled to take place on Sat., July 10, 11 a.m., at the site across from New Bethel Baptist Church, New Bethel Rd, Hardinsburg, KY 40413, (270) 756- 2722. Due to COVID-19 restrictions, we may not be able to secure a safe space to briefly gather after the service. As plans are in progress for that purpose, please notify us as soon as you know of your attendance and no later than July 1st. We understand that though you would like to be there, current health precautions and other circumstances may prevent you from doing so. We know that you will keep us all in your prayers and thoughts and carry Rose with you as she always had you in her heart. Thank you. Janice Miller, Mercedes Julian, and family In lieu of flowers and gifts, please consider a donation in "Rose" Miller's name to St. Jude's Children's Hospital. https://www.stjude.org/donate/pm.html?sc_dcm=58700006942402314

The family of Rosaura M. Miller created this Life Tributes page to make it easy to share your memories.