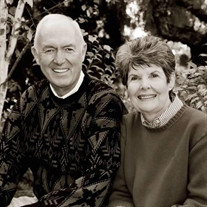 Funeral Friday, November 19th 11:30 am PST Zoom link: https://zoom.us/j/92011098615 Roy E. Christensen was born in Copperton, Utah on November 24, 1933. He met his wife, Carol, while attending Brigham Young University, and they postponed their engagement so Roy could accept a call to serve a mission for the Church of Jesus Christ of Latter-day Saints in Denmark. Upon Roy’s return, he and Carol were sealed for time and all eternity on October 8, 1956, in the Salt Lake City, Utah temple, and together they raised 11 children. Roy was an avid entrepreneur and leader in the healthcare industry. Before graduating BYU, he began his career as an accountant in Seattle. After 9 months he and Carol moved to California where Roy finished his degree through correspondence, became a CPA and eventually launched an accounting firm. He later founded numerous healthcare and long-term care companies, including Beverly Enterprises, GranCare, Covenant Care and Ensign Group. He was a member of President Nixon’s Healthcare Advisory Task Force on Medicare and Medicaid, and spent four years as a member of the Secretary of Health, Education and Welfare’s Advisory Task Force during the Nixon Administration. He also served as an advisor to the German government to address healthcare challenges after the reunification of Germany. Roy was a masterful teacher. He and Carol moved back to Utah for a time, and Elder Jeffrey R. Holland, then dean of Religious Education at BYU, asked Roy to teach a religion class at BYU. Later Roy was invited to teach an entrepreneurship class in the business school. In 2009, then president of BYU Cecil O. Samuelson invited Roy and Carol to serve on the President’s Leadership Council at BYU. Roy and Carol have always been extremely generous with their time, talents, and resources. Their immense generosity has blessed the lives of countless people around the world and is exceeded only by their testimonies of and love for our Savior Jesus Christ. Most recently, Roy served as a sealer in the Newport Beach California temple and an Elders Quorum instructor in the Newport Hills Ward. Roy is survived by his wife, Carol, 10 children, Cory (Yuko) Christensen, Kelly (Tom) Olds, Kathleen (Brad) Bateman, Kristine (John) Egbert, Karen (Lance) Cooper, Christopher (Claudia) Christensen, Kerri (Jay) Brady, Covey (Danae) Christensen, Clayton (Kami) Christensen, Mary Kay (David) Briggs, over 60 grandchildren, and over 40 great-grandchildren. He is preceded in death by his daughter Kimberly (Ray) Lovelock.

The family of Roy Edgar Christensen created this Life Tributes page to make it easy to share your memories.

Send flowers to the Christensen family.