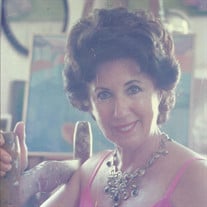 In Loving Memory of Ruby Valencia who passed peacefully in her sleep at the age of 89 and joined our Lord on Friday, January 28th 2022. Born Ruby Aránguiz Lezaeta on March 9, 1932 in Santiago, Chile to Rene Aránguiz Saravia and Eliana Lezaeta Rojas. Ruby touched the lives of many and shared her passion for light and color through her personality and love for art. A unique and special woman, sister, wife, mother, grandmother and International Artist. Ruby’s passion and dedication in her life was to bring joy, laughter and beauty to the world and all that knew her through her paintings and love for art. In her teen years she developed a strong sensibility for the arts in general. This sensibility led her to write, dance, sing, paint and communicate to others the beauty she perceived in the world surrounding her. During her life as an artist, Ruby was fortunate to have the opportunity to study in prestigious art schools in the various countries where she had the pleasure to live. She attended the University of Chile where she earned her Master’s Degree in Fine Arts from 1960 through 1966. She began to transform patterns and colors to produce movement in her paintings. Inspired by Van Goghs color and texture, she asserted her own color transformations and began use of the palette knife to introduce texture; a technique that was magical and harmonious. Every stroke of the palette knife was like a new chord to produce a magical masterpiece through light and color. From 1966 through 1968, Ruby studied at the Art Student League of New York. She was trained by Professor Ben Cunningham, color expert and by Professor Beverly Hale, anatomy and life drawing master, Curator of the Metropolitan Museum. She began to introduce people into the background of landscapes. This period was the introduction and preparation of her future work with the human figure. During this time, she met the photographer Peter A Juley, who took black and white pictures of several of her color oil paintings that are now part of the collection of his negatives at the Smithsonian Museum. She met her husband and love of her life, Manuel Valencia at the International House in New York City in 1966 and married Manuel in Mexico City in 1969. From 1969 through 1971, Ruby lived in Mexico City where she was inspired by the murals of Orozco, Rivera, and Siqueiros. They spoke to her through their passion and their strength, and by the use of folklore and color reflected in her own pallet and art. From 1972 through 1980, Ruby lived in Madrid, Spain where she became a mother to her daughter, Barbara in 1974 and her son, Manuel in 1978. There she enjoyed her new artistic life surrounded by history, art, and architecture with an emphasis on the Renaissance, and the Impressionists. She learned the magic of painting the landscapes of majestic little towns, and began working with the beautiful and spontaneous medium of pastels. From 1980 to 1994, living in the San Francisco Bay Area, she was very active as a professional artist. She was highlighted in various press reviews and her art was featured in many art critiques and highlighted as the wine label for the Chilean wine Viña Del Mar. Her artwork was published on the covers of several books by Isabelle Allende. Her art became bold with large canvases and palette knife textures. From 1994 to 2022, Ruby resided in Orange County, California where she was influenced by the beauty and energy of the ocean and of the tremendous lights surrounding her. A fine art publisher produced eight original oil paintings into limited serigraph editions. She also continued to receive commissions from publishing companies and individual authors. Her artwork is published in 40 book covers. She created an art group of five professional artists founded on the focus of painting live models with artistic backgrounds in long poses. This group was active from 1994-2004. Ruby was inspired by Matisse to create a series of odalisques and to paint printed fabric as a background and tried to produce movement, in dynamic compositions. Ruby enjoyed life with travel and family. She became a grandmother to Eliana Fernandez in 2009, Andres Valencia in 2010, Mateo Valencia in 2012 and Nicolas Fernandez in 2014. She is preceded in death by her parents, Rene and Eliana, her sisters, Maria Angelica, Eliana and brother Sergio. She is survived by her husband with whom she was married 52 years, Manuel Valencia and her children Barbara Fernandez and Manuel Valencia II, their spouses Julio Fernandez and Ewa Valencia, her four grandchildren and her brother Rene. Ruby was Embraced by Light and Color, that is how she lived her life. In her own words she writes: “I always wanted to express beauty in my paintings, the beauty of life itself, and of the nature surrounding us, the happiness of breathing, the pleasure of looking at colors -colors that many people do not perceive. I want everyone who looks at my paintings to feel my energy, the impact of the color itself and, especially, to see the powerful light surrounding everything. I discovered that everything has movement, space and form, that all of nature is moving and full of energy, and I try to paint these forces.” A Catholic Burial will take place in a private ceremony on Thursday, Feb 3rd, 2022. Family and friends are asked to participate in a virtual Celebration of Life which is scheduled to take place Saturday, Feb 5th, 2022. Details to follow.

In Loving Memory of Ruby Valencia who passed peacefully in her sleep at the age of 89 and joined our Lord on Friday, January 28th 2022. Born Ruby Aránguiz Lezaeta on March 9, 1932 in Santiago, Chile to Rene Aránguiz Saravia and Eliana Lezaeta... View Obituary & Service Information

The family of Ruby Valencia created this Life Tributes page to make it easy to share your memories.

In Loving Memory of Ruby Valencia who passed peacefully in her...

Send flowers to the Valencia family.