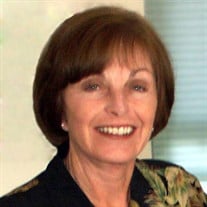 Sandra Kay Caron (Whiteford), age 76, resident of Laguna Niguel, California; passed away January 5, 2021. She had been in hospice care for late-stage Alzheimer’s disease in a long-term/memory care facility in Laguna Niguel, but it was Covid-19 that prematurely ended her life. Before she passed, her husband was able to say farewell to his beloved wife during a masked and socially distanced visit. Sandy was born in Cortland, New York November 11, 1944, to Lloyd T Whiteford and Dora M Whiteford (Lash). She was the eldest of three children. Sandy was a caring and inspiring big sister who supported and guided her siblings and helped look after the wellbeing of her parents. Sandy was a loving and generous family member and dear friend to many. She often reached out to those who knew her and was always willing to help those in need. Sandy had a beautiful engaging smile and a memorable uplifting laugh. In addition to her activities at Laguna Niguel Presbyterian Church, she loved to travel and was passionate about her tennis, cooking and long daily walks until she was no longer able. Sandy grew up in Homer, New York. She attended Homer Central High School (class of 1962), was an active student leader, was in choir, served as class Vice President and President, was on Student Council, and was a member of the National Honor Society. Sandy moved to San Francisco in her early twenties and later lived in Caracas (Venezuela), Miami, Irvine, California and Laguna Niguel. She was a resident of Orange County for 42 years. Throughout Sandy’s 40-year work career she served in several administrative positions and during the last 23 years of her career was an executive assistant and office manager for Management Tools, Inc. She retired in 2008. Sandy married the love of her life, Rene H Caron, on September 3, 1983, in Arcadia, California. They were together for more than 37 years. Sandy was preceded in death by her parents and is survived by her devoted and loving husband Rene, stepson Steven R Caron of St. Petersburg, Russia; sister Beverly A Jones (Whiteford) of Cortland, New York, brother Jerry L Whiteford of Gainesville, Georgia and their families; as well as many cousins, nephews, grandnephews, nieces and grandnieces. The family would like to express their heartfelt gratitude to those who took care of Sandy during the last five years of her battle with Alzheimer’s and the final two weeks of her life as she suffered from Covid-19, especially the caregivers, medical technicians, nurses, facility staff, doctors and hospice nurses. At this time, due to current pandemic conditions and restrictions on gatherings, there will be no memorial service for Sandy to celebrate her wonderful life. A private inurnment will be held on a future date. In lieu of flowers, the family asks that donations in Sandy’s name be made to the Alzheimer’s Association

Sandra Kay Caron (Whiteford), age 76, resident of Laguna Niguel, California; passed away January 5, 2021. She had been in hospice care for late-stage Alzheimer&#8217;s disease in a long-term/memory care facility in Laguna Niguel, but it was... View Obituary & Service Information

The family of Sandra Kay Caron created this Life Tributes page to make it easy to share your memories.