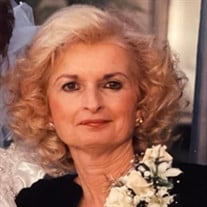 Sheila (Shelly) Ann Schneider passed away peacefully on January 20, 2021, at the age of 81. She was born to Robert and Ellen Mary Baxter in Los Angeles, CA, on November 26, 1939, the fourth of eight children. Sheila was raised in a large loving Catholic family in South Gate, CA, and attended high school at Saint Mary’s Academy, where she graduated in 1958. In 1965, Sheila lived with her brother Jim while he was attending the Colorado State University, Veterinary Medicine School. During her time in Colorado, she met Jim’s classmate, Everett Cheeney. Approximately a year later, Sheila married Everett in Los Angeles, on September 3, 1966. Sheila and Everett would eventually have three children and make their home in Hanford, CA, where Everett established his veterinary practice. Sheila was very social and enjoyed being the life of the party, hosting many events and participating in several clubs in Hanford. She also enjoyed traveling and taking family trips, such as houseboat adventures, cruises, and cousin picnics with her large family, especially when her children were young. As time passed, unfortunately, Sheila’s marriage to Everett ended in 1983. Sheila stayed in Hanford and began a relationship with Jack Schneider. Together they moved to Modesto, CA, in 1986, where they would live until they married on July 28, 1994. Unfortunately, shortly thereafter Jack passed away after battling cancer. Following Jack’s death, Sheila moved back to South Gate to live with and help care for her mother. Sheila subsequently moved to the Anaheim area, where she lived until her death. During this time she developed a very special bond with the Andre family, and really enjoyed spending time with all her family. Sheila was preceded in death by her husband Jack, her parents, Robert Baxter and Ellen Mary (Bahan) Baxter, and her brother, James (Jim) Baxter. Sheila was very proud of her three surviving children, son Greg Cheeney of Palm Desert, CA, daughter Cheryl Hunt and husband Jason of Hanford, CA, and daughter Julie Kalafut and husband Mark of Visalia, CA. Sheila has two grandsons, Jared and Justin Hunt, and two granddaughters Kasen and Addison Kalafut. She is survived by six siblings. Brother Robert (Bob) Baxter of Temecula, CA, and sisters, Mary Ellen Bryant of Downey, CA, Margaret Andre and husband Michael of Mission Viejo, CA, Helen Beyrooty and husband Ed of Downey, CA, Barbara Wykoff and husband Al of Venice, FL, and Cathy Main and husband Ben of Centennial, CO, as well as sister-in-law Diane Baxter of Davis, CA. Sheila also leaves behind numerous nephews and nieces, all of whom she loved very much. Sheila will be laid to rest in a private service with her family. Due to the current social restrictions, no formal services will be held. Please share your thoughts and fond memories with our family on Sheila’s tribute page: https://www.mccormickandson.com/obituaries/Sheila-Schneider/#!/Obituary

Sheila (Shelly) Ann Schneider passed away peacefully on January 20, 2021, at the age of 81. She was born to Robert and Ellen Mary Baxter in Los Angeles, CA, on November 26, 1939, the fourth of eight children. Sheila was raised in a large loving... View Obituary & Service Information

The family of Sheila Ann Schneider created this Life Tributes page to make it easy to share your memories.

Send flowers to the Schneider family.