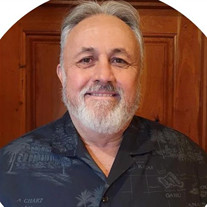 Steven Wayne Roper 64, of Laguna Hills, California passed away in his sleep at his home on Monday, August 16, 2021. Fondly known as Big Steve to the youth and Papa Steve to his grandchildren, he was born to Loyal Wayne and Mary Jane Roper in Los Angeles, California on August 23, 1956. He has two sisters, Susan Carter (passed) and Nancy Montoya. Steve was sealed to the love of his life Cynthia Faye Gahr on May 13, 1978 in the Los Angeles Temple for time and all eternity. Together they have six children, Joshua, Jacob, Charity, Angel, Jedakiah and Tima. Steve grew up on the streets of Buena Park playing baseball and basketball. He started working at 14 years old at Tony’s Fish Market and over the years, worked as a character performer and drove the lights float in the electrical parades at Disneyland. He also worked as a painter and purchased his first car at 15, a Volkswagon Bug. Steve’s childhood was filled with scheming and learning, he shared many experiences of what not to do over the years. After graduating from Buena Park High School in 1974, he attended Rick’s College where he decided to serve a mission. Steve served a faithful mission for The Church of Jesus Christ of Latter Day Saints in the Oahu, Hawaii Mission. Steve earned an Associate in Science Degree at Cypress College and a Doctorate in Chiropractic Medicine at Cleveland Chiropractic College In Los Angeles in 1982. Steve was very accomplished in providing for his family with his successful career choice. He followed the motto, work hard, travel harder. As an avid traveler, Steve loved nothing more than traveling with his family. He traveled to five continents, visiting 48 states and over 20 countries and territories including Poland, China, Peru, Egypt and Israel. Steve also served in various callings in the church, but he loved working with the youth the most. He felt strongly about genealogy and family history work and was very successful at tracing his family back multiple generations. Steve and his beautiful wife served a faithful Spanish speaking mission in Honduras in 2011. Since 2015, Steve operated 3 Ropes Painting with 2 of his sons. The company has an impeccable reputation in Southern Utah where it continues to operate, Steve was very proud of it. Steve will be remembered for his strong faith in Jesus Christ, his work ethic and his sense of humor. He will always be seen in our memories wearing a red hat, flip flops and eating sunflower seeds. Steve loved sports and he would never miss a sporting event for his children or grandchildren. He was always the loudest fan in the crowd. Steve impacted a lot of lives and he will live on through his family, friends and even strangers. To his family and others, the impact of his character is immeasurable. Steve’s greatest joy was his family. He was completely devoted to his wife Cindy and his children and grandchildren. As a grandfather you could often find him playing cards or chess with his 6 to 10 year old grandsons, talking with his teenage granddaughters or reading books to the babies. Before his passing Steve was working to become a motivational speaker and created Step Ahead Steve services, he believed that inspirational talks could help others take one step at a time towards a better life. Steve left this life too early, but he has given those he loved a legacy of living life to the fullest. Steve is survived by his wife Cindy, his son Joshua, grand-daughter Kailea, his son Jacob, grandchildren Caleb and Grace, his daughter Charity, son in-law Russell, grandchildren Leilani, Breezy, Ryker and Tyden, his daughter Angel, son in-law Luis, grandchildren Mikailo, Matteo, Nico Angelo, Keano and Marco Alexio, his son Jedakiah, daughter in-law Keely, grandsons Teancum, Ranon and Kaleo, and his youngest son Samuel Tima. Steve is also survived by his sister Nancy and countless nieces and nephews and friends who loved him dearly. He is preceded in death by his parents and his sister Susan. A graveside service will be held on August 31, 2021, 2:00 pm at El Toro Memorial Park 25751 Trabuco Rd, Lake Forest, CA 92630. The Roper family has asked in lieu of flowers please donate to the Mission fund for The Church of Jesus Christ of Latter-day Saints or donations to the funeral fund can be sent directly to venmo @SteveRoper-Legacy

Steven Wayne Roper 64, of Laguna Hills, California passed away in his sleep at his home on Monday, August 16, 2021. Fondly known as Big Steve to the youth and Papa Steve to his grandchildren, he was born to Loyal Wayne and Mary Jane Roper in... View Obituary & Service Information

The family of Steven Wayne Roper created this Life Tributes page to make it easy to share your memories.

Send flowers to the Roper family.