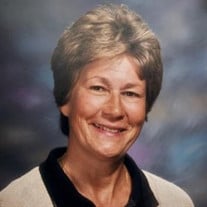 Sue passed away peacefully at home on Sunday, May 16, 2021 at age 73, surrounded by family. Sue and her parents, Edgar Willson King and Anne Lois Richter moved from Minneapolis to Southern California where the family rapidly expanded to include five more children over the ensuing years. The family home was established in Glendale in 1958; Sue attended Hoover High School, California State University at Long Beach and the University of California at Santa Barbara where she was a third generation member of the Delta Gamma Sorority. She was awarded a Bachelor of Arts degree in 1969. Sue received her teaching certification and taught elementary school in San Clemente, California for 37 years before retiring in 2007. She subsequently lived in San Juan Capistrano and pursued her lifelong passions of service to the Episcopal church, woodworking, golf and everything out of doors, especially the beach. Many who knew Sue say that she was a ray of light, always positive, upbeat, had boundless energy, and was always ready to pitch in and do whatever was needed. She was extremely humble and down to earth, preferring to work ‘behind the scenes’, never seeking personal recognition. Sue maintained a lifelong commitment to the Girl Scouts, first working with Camp River Glen in the San Bernardino National Forest, and later serving as Director of Camp Blue Bay, a 179 acre beach-front property located in East Hampton, New York. In later years, she organized a Girl Scout volunteer sailing program based in Dana Point. A long-term member, Sue was very active at St. Clement's by the Sea Episcopal Church in San Clemente, serving on the vestry and several groups including the Altar and Flower Guilds and the Rector Committee. Within her community at Reata Glen in Rancho Mission Viejo, she was very active in several groups- she was an integral part of the team that established a significant community woodworking shop which is designed to serve the residents and local charities, was active in the “Yellow Jackets” bicycling group, was instrumental in the Employee Appreciation initiative, and loved to participate in table tennis activities. By all accounts, she was the ‘go-to’ person- a source of joy and inspiration to her community. She was the greatest sister ever to her siblings: Nancy (Howard) of Long Beach, CA, Betsy (David) of Mission Viejo, CA, Robert (Christine) of Marietta, GA, Jon (Gerry) of Ft. Lauderdale, FL, and Richard (Jill) of Pasadena, CA. Sue would regularly send handmade presents for all sorts of special occasions. She was ever the organizer and never missed sending a birthday card or taking time for a call to recognize a significant date in her siblings’ lives. She was also a doting aunt to her nine nieces and nephews: Kelly, Katie, Michael, Jeffrey, Daniel, Brian, Craig, Sam, and Haley. At Sue’s request, interment at St. Mark’s Episcopal Church, Glendale, will be attended by family only. Donations in Sue’s memory made be made to: St. Clement's By The Sea Episcopal Church 202 Avenida Aragon, San Clemente, CA 92672 Re: Susan Elizabeth King [email protected] (949) 492-3401 or The American Cancer Society PO Box 42040 Oklahoma City, OK 73123 Or www.cancer.org. Please include Susan’s name, and cc [email protected]

Sue passed away peacefully at home on Sunday, May 16, 2021 at age 73, surrounded by family. Sue and her parents, Edgar Willson King and Anne Lois Richter moved from Minneapolis to Southern California where the family rapidly expanded to include... View Obituary & Service Information

The family of Susan King created this Life Tributes page to make it easy to share your memories.