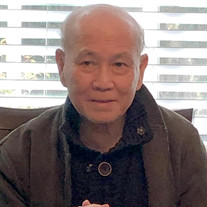 Thomas Tao Dangvu, born February 21, 1942, passed peacefully in his sleep on Thursday, December 23, 2021 at his Lake Forest home. He was born in Hanoi, Vietnam to his father Phan Dangvu, and his mother Le Thi Nguyen. He had several siblings, Dat (passed), Huyen, Thuy, Minh, and Hung. After a five-year long engagement, Thomas married Michelle Pham on October 19th, 1966. They had three sons Peter, Steven (passed), and Andrew. Thomas received his Baccalaureate Degree in Pharmacy from the University of Saigon. After he was married, Thomas owned his own pharmacy and worked as a pharmacist for many years. He also continued his education by attending the University of Oklahoma for his Masters Degree. During the Vietnam War, he served in the South Vietnamese army. As an officer, he realized that the Fall of Saigon was inevitable. After completion of his mandatory commitment with the army, he relocated with his wife, children, and his sister-in-law An Pham to the United States for a better life. Initially, he worked as a Clinical Laboratory Supervisor in Huntington Beach. It was many years later that he decided to return to his career as a pharmacist, working for Longs Drugs, and then for CVS before retiring. When he was not working, he enjoyed road trips with his family to places such as Las Vegas, San Francisco, and the Grand Canyon. He also loved playing the tour guide to his siblings and their families when they would come from France to visit. Thomas was a hard-working person, dedicated to his family. His priority was teaching his children to be inquisitive, strive for higher education, and contribute to society, as well as be respectful and kind. He was very proud to first see his son graduate from medical school followed by his daughter-in-law the following year. He would probably say that his greatest joys were the births of his two grandsons, Samuel and Benjamin. Thomas is survived by his wife Michelle, son Peter, daughter-in-law Angela Watson Dangvu, son Andrew, grandsons Samuel and Benjamin, his siblings, and many nieces and nephews. Services will be held at Noon on January 9th, 2022 at El Toro Memorial Park, 25751 Trabuco Road, Lake Forest, CA 92630. Viewing and visitation will be available on January 8th, 2022, from Noon-3PM at McCormick & Son Mortuary, 2500 Moulton Pkwy, Laguna Hills, CA 92637.

Thomas Tao Dangvu, born February 21, 1942, passed peacefully in his sleep on Thursday, December 23, 2021 at his Lake Forest home. He was born in Hanoi, Vietnam to his father Phan Dangvu, and his mother Le Thi Nguyen. He had several siblings,... View Obituary & Service Information

The family of Thomas Tao Dangvu created this Life Tributes page to make it easy to share your memories.

Send flowers to the Dangvu family.