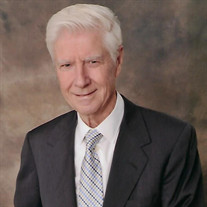 Ulrich Emanuel “Rick” Keller died at 90 years of age in Villa Park, California Surrounded by his family on Wednesday, August 25, 2021. His death was due to complications he sustained from a car accident back in 2019. Ulrich was born to Ludwig & Anna Marie Keller on May 3rd, 1931 in Gleiwitz, Germany, which is now part of Poland. He was the third of 5 children. Ulrich grew up around Northern Germany during much of World War II. As a small child, he and his family barely escaped many bombing threats, severe famine and cold. Ulrich married Rita E. Mc Laughlin on November 23, 1955 in Glessen, Germany. They met at the US Army base camp where Rita was an elementary school teacher and Ulrich taught basic German lessons to the army personnel as well as an interpreter for prisoners of war as he could speak 5 languages. Ulrich then received his Doctorate in Veterinary Medicine in Glessen University in Germany. In 1957 he moved his wife and new born son to the USA, first to Boston (where Rita was born) then to sunny San Diego, where he accepted a job as a veterinarian with the US Department of Agriculture and moonlighting as a second job as a veterinarian with the San Diego Zoo. He was soon regularly featured on their weekly TV show called “Zoorama”. treating and performing surgeries on many different types of animals, including an abscessed tooth from a polar bear. Following the birth of his daughter Emily, in 1958, he received a promotion with the US Department of Agriculture as the supervisor of the meat inspection. He received several promotions and transferred to positions in Pennsylvania (where his third child, Peter, was born). Then came back to California living in Whittier, San Jose, and back to Whittier. Ulrich’s thirst for knowledge was a lifelong pursuit as he would often go to the library, read the encyclopedia and various business journals. As a family they would enjoy get-togethers and parties, where Ulrich would love to cook. He always had an interest in the stock market and would chart, all the stocks he bought and sold. Ulrich’s side interest in gold and tungsten mining eventually became a full-time venture, when after 20 years with the USDA, he decided to go into the tungsten business with his son, Peter. He and Peter designed and fabricated many new pieces of equipment, but moved on after 10 years of hard work. When Peter got too ill to work, Ulrich would often help with bill collecting, meal preparation and paperwork. At that time, his eldest son, Rick, also needed help with his new financial advisory business. Ulrich was happy to assist in his children's business ventures and saw parenting as a limitless and supportive option for family success. When Rick’s business grew faster than anticipated, Ulrich pitched in, working for free for several years and sat on his board of directors. Eventually Ulrich enjoyed the fruits of retirement, settling in Los Osos, California for many years. He enjoyed time with his best friend Bob Robertson and later, with the arrival of grandchildren, came back to Southern California and Laguna Woods where he and his wife Rita made several lifelong friendships. They loved to host parties and were very active walkers in their neighborhood. He is preceded in death by Rita, his wife of 63 years, and his siblings Ludwig, Sebastian, Eberhard and sister Sabina. He is survived by son’s Ulrich “Rick” Keller Jr, Emily Keller and Peter Keller, and grandkids Elena Leonard, Zane Keller, and Carena Keller. Ulrich Keller was a brilliant and memorable friend, father and grandfather. His vast knowledge on any subject astonished and captivated all who know him. Truly a master of all trades. A graveside memorial is planned for immediate family at the Holy Sepulcher Cemetery in Orange, CA.

Ulrich Emanuel &#8220;Rick&#8221; Keller died at 90 years of age in Villa Park, California Surrounded by his family on Wednesday, August 25, 2021. His death was due to complications he sustained from a car accident back in 2019. Ulrich was... View Obituary & Service Information

The family of Ulrich Emanuel Keller created this Life Tributes page to make it easy to share your memories.

Send flowers to the Keller family.