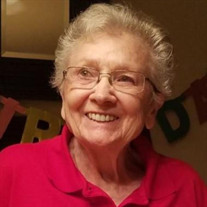 Lovingly known as Mom, Grandma Roni, sister, aunt, and friend, Roni was born in Wales, UK. At age 1 she moved with her family to challenge life on the prairies of Alberta, Canada. Homestead farm life, in a one room uninsulated cabin, was hard. She often spoke in wonder and admiration as to how her mother was able to keep them all alive. At 9 years old, the family, led by her mother Annie, and siblings Betty, Gil, Trevor, Kieran, and Terry, and followed later by her father, William, moved to Edmonton, AB. The children all started working early, and through perseverance and determination, the family beat many odds. Roni started her intended travel career, working for an airlines in Edmonton. She dreamed of travel benefits and adventure, so when her first job abruptly ended, she vowed to not let that stop her in reaching her career goals. At age 19, when invited by relatives, she decided to try a career in the big city and moved to New York. She picked up where she left off working for a NYC steamship line. After time off to have children with her husband Joe, and after a few years working at the family catering business, Roni found her way back to the travel industry. She wanted to travel and to give her growing children the benefits of a life of adventure. For almost 40 years, Roni successfully fought her way up the airline industry ladder, not an easy task for a woman of her generation. During that time, Roni also joined the Civil Air Patrol, achieved the rank of Captain, and earned her private pilot’s license. She was well loved by all, and always well respected by her friends, employers and her peers in the airlines. The family traveled with her all over the world, to airline conferences and on vacations, and Roni achieved her goal of landing on and exploring every continent on earth, on a 2006 trip with a dear friend to Antarctica. Through perseverance and determination, Roni beat many odds. She excelled in every position she held, demonstrating her value to each airline she worked for, before stepping further up the ladder. Even after retirement, one of her last employers, talked her into commuting for months from her new home in Lynden WA, to their headquarters in Amsterdam, Netherlands. Her job was to repeat one of her domestic achievements internationally. With her immediate family now grown, Lynden WA was a move to be closer to family still in Canada. Roni’s love of quilting called her out of retirement and had her try her hand at owning a fabric shop for a while. She kept busy with her love of quilting, gardening, and writing, and was always accompanied by her many beloved Schnauzer dogs. She enjoyed her frequent trips across the border for visits with family and had many Canadian friends. Two retirements later, Roni again moved to be closer to her son Joe and family. San Juan Capistrano, CA, was her destination, and her grandchildren, dogs, hobbies and her growing interest in politics filled her life. Although further away, she spent time on the phone with daughter Linda discussing quilting, and with her daughter Sandy, discussing their love of dogs, current events and politics. Roni was a member of Surf Side Quilters Guild, and a very active member of their philanthropy group. She quilted hundreds of quilts which the group donated to needy children, veterans, and seniors. She enjoyed her many friends there. Roni enjoyed family and friends, and always tried to impart what her life experiences had taught her. She spent time writing her memoirs, themed by the words she lived by: Perseverance and Determination. She paraphrased her favorite poem as follows… “When things go wrong as they sometimes will, And the road ahead seems all uphill, When you want to stop and say ‘that’s it’ Rest if you must, but don’t you quit” Dear Mom, Rest now if you must, but you never quit. Your Loving Family

Lovingly known as Mom, Grandma Roni, sister, aunt, and friend, Roni was born in Wales, UK. At age 1 she moved with her family to challenge life on the prairies of Alberta, Canada. Homestead farm life, in a one room uninsulated cabin, was hard.... View Obituary & Service Information

The family of V. Roni Trehy created this Life Tributes page to make it easy to share your memories.

Send flowers to the Trehy family.