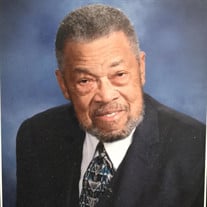 THE LIFE, THE LOVE, THE LEGACY OF VERNON ANDREWS, SR. On Monday, May 31, 2021 at the age of 87, Vernon Andrews, Sr. departed this life leaving a legacy of love to everyone that he knew. Vernon was born on April 26, 1934, in Roans Prairie, TX to James and Velma Andrews. At an early age his family moved to Tucson, AZ and there he attended Dunbar School and Tucson High School. Vernon enjoyed sports and actively participated in basketball and baseball. Vernon was the first African American in Tucson to referee high school basketball. He also refereed Junior college basketball all over the of State of Arizona. He later developed a passion for golf and continued to play for many years. He married Minnie Anderson and to this union were born three children, Janet, Connie and Vernon Jr. He accepted Christ at an early age and attended Mt. Calvary Missionary Baptist Church in Tucson, AZ where he sang in the choir for several years. His work history in purchasing began in Tucson, AZ where he was the second African American to be employed as a buyer for Pima County. Following Pima County, he was the first African American hired as a buyer at Pima Community College. With this knowledge of purchasing, he was hired by Hughes Aircraft Missile Systems in Tucson, AZ where he worked for an extended period of time. He moved to Southern California and continued working in purchasing until his retirement from Alcon Laboratories in 1999. His work ethic and personality left such an impact with his coworkers at Alcon, they continued to include him in family, friends and company gatherings for the past 22 years. While assisting a friend’s sister who had recently moved to California, he met LaFonta Wall. Their relationship developed and on February 13, 1988, they were married and he was a loving husband and stepfather for 33 years. In retirement his passion was FAMILY. Vernon was a wonderful father, friend and counselor to his children. He was a great brother to his siblings and a wonderful uncle, stepfather extraordinaire and the greatest grandfather of all times. He often wore a sweatshirt that stated RETIRED AND ENJOYING SPOILING MY GRANDCHILDREN. He joined Second Baptist Church and was a devoted member of the Robert Allen Men’s Choir and the Small Group Bible Study. When his health declined and was unable to drive, the choir members and the small group were always available to get him to and from meetings, rehearsals and worship service. Vernon is predeceased by his parents, James Andrews and Velma Hughes; three brothers, James, Ira and Thomas Andrews; and one sister, Lola Newsom. Vernon is survived by his wife, LaFonta Wall of 33 years; two daughters, Dr. Janet Long (William) and Connie-Williams (Ronnie); one son, Vernon Andrews Jr; two grandsons, Allan Lamont Thomas and Carl Smith Jr.; four great-grandchildren, Shamari, Alany, Sade and Elias; one brother, Clarence Andrews (Mary) of Tucson, AZ; four sisters, Mildred Shepherd of Compton, CA, Katie Mae Andrews of Houston, Tx, Thelma Hearn of Tucson, AZ and Halene Giddings of Houston, TX; 30 nieces and nephews and a host of grand- nieces and nephews. He is also survived by two stepdaughters, Donnetta Wall of Jurupa Valley, CA and Susan Wall of San Diego, CA; two stepsons James Wall Jr of Mission Viejo and Stephen Wall of Garden Grove, CA; three step-grandchildren Jovonte Wall of Coolidge, AZ; Michelle DeDmon of Las Vegas, NV and Michael DeDmon of San Diego, CA and four step great-grandchildren.

THE LIFE, THE LOVE, THE LEGACY OF VERNON ANDREWS, SR. On Monday, May 31, 2021 at the age of 87, Vernon Andrews, Sr. departed this life leaving a legacy of love to everyone that he knew. Vernon was born on April 26, 1934, in Roans Prairie,... View Obituary & Service Information

The family of Vernon Andrews Sr. created this Life Tributes page to make it easy to share your memories.

THE LIFE, THE LOVE, THE LEGACY OF VERNON ANDREWS, SR.
On Monday,...

Send flowers to the Andrews family.