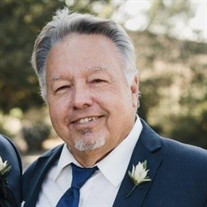 Walter Raleigh Hunt III (called “Wally” by all who knew him), a long time resident of Lake Forest, passed away unexpectedly on January 10, 2021. Wally was born in Corbin KY on May 3, 1948 to Walter R. Hunt, Jr. and Joyce Ledington and had one sibling, Robin Adkins, who passed in 1981. He grew up in Kentucky and Ohio where he graduated high school and attended college classes. In 1967 he joined the U.S. Navy for four years working in electronics. Upon discharge from the Navy, Wally began his career in the field of computer technology and was delighted to accept a job transfer to California in the late 1970’s. He traded the cold weather for sunny CA, bought a Harley–Davidson and a Corvette, and vowed to never, ever dig vehicles out of the snow again. Married in 1982, his greatest pride and joy were his kids and he loved spending time with them and his 2 1/2 year old grand daughter. He raised his two boys in Orange County CA and enjoyed watching them play in many sports. He took the family on many trips camping in South Carlsbad beach and Saline Valley, boating in the Colorado River and Lake Mojave, and skiing. Wally was a proud “do it yourselfer”, an expert in electronics and computer technology, and he enjoyed many mechanical and electronic projects as a hobby after retirement. He enjoyed live music, attended many Tom Petty concerts, and his favorite guitarist was Mike Campbell. He enjoyed NASCAR, recently bought a Jeep, and went off-roading with his sons and brother-in-law Derek. Wally was always full of factoids, it was never a good idea to play against him in Trivial Pursuit. Wally was down to earth and unassuming with a good sense of humor and even better smile. He was rarely without his Carhartt t-shirt. He loved the sturdy pockets that he considered necessary for his eyeglasses, pen, and most recently the cookies that his grand daughter quickly learned she could fish out of the pocket. This routine became their “thing” which was beyond adorable. Wally is survived by his oldest son Ryan and daughter–in–law Wendy, his younger son Justin (“JD”), their mother Donna, his grand-daughter Harper Rose, many in-laws, nieces and nephews, and his grand dog Rusty (he and Wally had special bond). Wally was very loved and will be missed by everyone who knew him. There will be an open house celebration of life on Saturday, Jan 30th at 26052 Lorri Dr., Lake Forest between 2:00 – 6:00PM. All friends and family are welcome to attend. You belong among the wildflowers You belong in a boat out at sea Sail away, kill off the hours You belong somewhere you feel free -Tom Petty

The family of Walter Raleigh Hunt III created this Life Tributes page to make it easy to share your memories.

Walter Raleigh Hunt III (called “Wally” by all who knew him),...

Send flowers to the Hunt family.