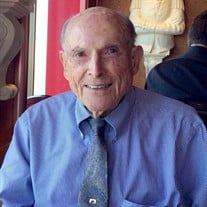 Walter Kenneth Janssen was born November 29, 1926, in San Francisco, California, an only child to Walter Henry Janssen and Julia Veronica (Franceschi) Janssen. Walter is survived by his daughter Laura Lynn Janssen, and was predeceased by his wife Diane Benoit Janssen (2015) and his son Scott Kenneth Janssen (1968). Walter is also survived by his sister-in-law Carol Jean Benoit, niece Susan Unmack Cuthbertson, nephew David Unmack, grandnephews Gordon, Gareth and Andrew Cuthbertson, and great-grandnephews James and Harry Cuthbertson and great-grandnieces Lily Cuthbertson and Saydee Cuthbertson. Walter grew up in the depths of the Great Depression in San Francisco; however, his father’s acumen as a salesman provided a stable and happy childhood for Walter. They often spent their summers tent-camping in Yosemite. Walter’s parents were committed to sending their son to college, determined to provide opportunities for him that they themselves never experienced, and they instilled in him a solid work ethic and set of values that served him well throughout his life. Walter graduated from Abraham Lincoln High School in 1944. Known to his friends as Walt, he was voted Best Dressed Man at Lincoln and was the concertmaster of the Lincoln orchestra, having played violin since childhood. Walter attended the University of California, Berkeley for less than a year before registering for service in World War II on his 18th birthday. He completed his basic training in Texas just as the war ended, but decided to serve in the occupation forces and spent a year in Korea before returning home and completing his studies at Cal. He graduated with a Bachelor of Arts in Humanities from the College of Letters & Sciences in 1950. He was an active member of the Tau Kappa Epsilon (TKE) fraternity and met his future wife Diane Benoit at a Cal fraternity mixer in 1949. Working in the dispensary during his military service appealed to Walter’s practical nature, and greatly influenced his decision to pursue a medical career. He attended Northwestern University in Chicago and earned his Doctor of Medicine in 1954. During this time, he proposed to Diane and, upon his return from Chicago, they were married at St. Paulus Church in San Francisco on August 21, 1954. They spent their honeymoon visiting Santa Monica and Laguna Beach, not knowing then that they would eventually settle in Southern California. Walter completed his medical internship at Mt. Zion Hospital in San Francisco and then secured a residency position at Los Angeles County Hospital, prompting the newlyweds to move to Southern California in 1955. As Walter completed his residency, Diane taught first grade in South Pasadena. Initially assuming they would return to San Francisco, Walt and Diane changed their plans when Walter was enticed by an opportunity to join an anesthesia group in Long Beach. He joined the staff of Community Hospital Long Beach in 1957 where he spent 34 years as an anesthesiologist, winning high praise and respect from his colleagues and patients for his low-key demeanor and dedication to his craft. Walt and Diane purchased their first home in Seal Beach in 1958. Their son Scott was born in 1959, and daughter Laura came along in 1962. They moved to the newly planned community of Huntington Harbour in 1964, just as it was being developed out of the marshland immediately north of Huntington Beach. As they settled into a comfortable life, Walt and Diane developed a wide circle of friends and began to plan trips to see the world. Traveling became a passion for them both and they delighted in planning journeys to far-away places in addition to their family vacations in the summers. Walter retired from the medical field in 1992 and joined in Diane’s passion for golf and charity work. Together they were founding members of the Flying Dutchman, whose philanthropy supported the Orange County Center for the Performing Arts, and they refocused their travels to include golf trips with their friends and excursions with Elderhostel. After traveling the world, their favorite places to return to again and again were Palm Springs and the Hawaiian Islands, two places where they found natural beauty and peaceful moments. Walter was a devoted and loving husband and cared for Diane after she developed symptoms of Alzheimer’s disease in the mid-2000s. They had just celebrated their 60th wedding anniversary when Diane passed away in 2015. Walter was a caring and unfaltering father, a considerate and generous friend and colleague, and a compassionate human being who always thought of others before himself. Walt will be dearly missed by many. There will be no service. Donations in his memory may be made to the Community Hospital Long Beach Foundation in the memory of Walter K. Janssen, M.D., either online at www.chlbfoundation.org, or by mail to Community Hospital Long Beach Foundation, 1760 Termino Ave., Suite 105, Long Beach, CA 90804.

Walter Kenneth Janssen was born November 29, 1926, in San Francisco, California, an only child to Walter Henry Janssen and Julia Veronica (Franceschi) Janssen. Walter is survived by his daughter Laura Lynn Janssen, and was predeceased by his... View Obituary & Service Information

The family of Walter Kenneth Janssen created this Life Tributes page to make it easy to share your memories.

Send flowers to the Janssen family.