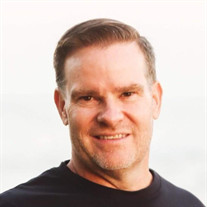 Not sure what to send?

Wayne Sumsion Clarke Jr. was born in Cedar City, Utah on April 30th, 1968 to two loving parents Wayne Sabey Clarke Sr. and Margaret Ann Sumsion Clarke. He was the third born of 4 children. He is survived by his beloved Mother Ann and his sisters Kelly (David Kelly), Colleen (Derek), and Char (Jeff), and his 11 Clarke family nieces and nephews and their children. He had a very happy and mischievous childhood as all brothers do. He loved being outside and was always up for an adventure. He only grew a bit in stature…but will be remembered as a giant among men. One of the many highlights of his life was serving a mission for The Church of Jesus Christ of Latter-Day Saints in Puerto Rico or as he lovingly called it La Isla de Encanto. He went on to study at Brigham Young University where he met the love of his life Erin at a college party. The two of them just got each other from the beginning. Wayne was a lifelong learner and teacher. He was extremely thorough and efficient with his time, he never idled. He cared deeply, loved loyally, and lives on eternally through his wife Erin and their three children Brynn, Cass, and Ethan who all happen to have his eyebrows. His family will not receive the expected quantity of time with him, but the time they did have together was of the highest quality. He loved the time he had with his sons-in-law Zach and James, and adored the joy that came with his 1st granddaughter Laney. He had many passions in life including but certainly not limited to surfing, walking, skateboarding, skiing, boating, wakeboarding, diving, hockey (go kings go!), driving his BMW, biking, traveling, 80s alternative and ska music, photography, travel, planning and scheduling, spreadsheet-ing, useful and also useless trivia, talking to himself, cooking crepes, eating breakfast burritos, playing video games, going to the movies, critiquing those movies, finding new restaurants, critiquing those restaurants, and of course giving the best advice and recommendations on just about anything. Nothing made him happier than to watch his children and their friends (which he loves as his own children) succeed. A natural born problem solver, he worked in the technology industry for 30 years. He spent the last 10 years working at Microsoft as a Project Manager where he proudly thrived. When he was a boy, he told his mom while on vacation in California that he was going to move to California and become a surfer. Throughout the years here, and in order to end a surf session, he would always say “just one more good wave”. He went out on the best wave ever because his last years on earth were spent fulfilling his dreams with Erin in their beautiful home by Doheny beach. They cherished every moment together and will be reunited in the eternities because of Jesus Christ and the Atonement in which he knew to be true. Wayne plans to continue to serve others. If you want to help, here is a link that will take you to a charitable organization we felt strongly Wayne wants to support: http://www.casadetodos.org/ It is a shelter for abused women and children in Puerto Rico. Flowers are also welcome. Amad a otros Zoom information for Wayne Clarke's celebration service: https://zoom.us/j/92660886400 Webinar ID: 926 6088 6400

Wayne Sumsion Clarke Jr. was born in Cedar City, Utah on April 30th, 1968 to two loving parents Wayne Sabey Clarke Sr. and Margaret Ann Sumsion Clarke. He was the third born of 4 children. He is survived by his beloved Mother Ann and his sisters... View Obituary & Service Information

The family of Wayne Sumsion Clarke created this Life Tributes page to make it easy to share your memories.