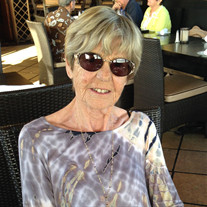 Wilhelmina Adriana Marie Antonius-Taps, born December 27, 1934 in Amsterdam, Holland, passed peacefully on the morning of January 29, 2021 in her Laguna Woods, California home. Wilhelmina, known as Willy, was born to David Lehman and Anke Pietje. She has nine siblings Janny, Peter (passed), Beppy, Gerard (passed), Marianne, David, Margo, Angela, and Florence (passed). After working for KLM, Willy emigrated to Montreal, Canada in 1963 where she got a job as a nanny and then started working in international trade for the United Nations. While in Montreal, she met the love of her life, Raymond Antonius. After a short courtship, Raymond and Willy, travelled to Stowe, Vermont to get married in the fall of 1963 and had three children Valerie, Jacqueline, and Terence. Shortly after the birth of their third child, they moved to Los Angeles, CA where they raised three children. On March 16, 1984, Raymond passed away. In 1994 Willy married Joni Taps in California and soon after, moved to Santa Fe, New Mexico to be close to her daughters and grandchildren. Joni passed in the fall of 1998 in Santa Fe. In 2012 Willy, along with her daughter, Valerie, moved to Laguna Woods to be close to her son. She is survived by her three children and five grandchildren (Austin, Ali, Patrick, Luke, and Andrew)Willy’s fun-loving outgoing personality was contagious to everyone she met. The simplest pleasures in life brought her great joy. She loved a quiet evening with friends with cigarettes and a glass of “cheap” red wine. Also, she enjoyed adventurous travels with her daughter, Jacqueline. Willy would be the first to start a Conga dance line at any live music venue or restaurant that she attended. In her early married life, Willy enjoyed playing golf, piano, enameling, social bridge with friends, and being free-spirited. Willy has dedicated her life to raising her children and especially caring for her oldest daughter, Valerie, with special needs until the very end of her days. Today we honor and bless our beloved mother who we know is most likely leading the Conga line up in her new eternal home, and yes drinking the “finest” red wine in heaven. Cheers to you mom….we love you now and forever, and you will always be in our hearts and be the light that guides us. Love Always, Valerie, Jacqueline, and Terence

The family of Wilhelmina Adriana Maria Antonius-Taps created this Life Tributes page to make it easy to share your memories.

Send flowers to the Antonius-Taps family.