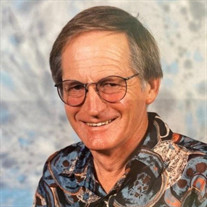 William Holley Nicholson passed peacefully in his sleep on June 1, 2021 with his loving wife, Joannie, by his side. He was 83. Bill was born on September 15th, 1938 to Lynn and Roberta Nicholson in Worcester, Massachusetts. Bill had one sibling, Doug, who resides on the East coast. Bill and Joannie met in 1983 and were married in 1984. They were smitten from the moment they laid eyes on one another at a dance/social group called Parents without Partners. In 1957 Bill graduated from Wachusett Regional High School in Holden, MA. He went on to earn his bachelor’s and master’s degrees in education from Worcester State College. He also studied at the University of Connecticut at Storrs earning his doctorate in education. Bill enjoyed a tenured career as principal and associate superintendent in many schools throughout Massachusetts and Connecticut. He also enjoyed a career as entrepreneur, publisher of various newspaper publications, and editor for his wife’s authored books. He too was a prolific writer having authored a book entitled “The Aids Conspiracy” under the pen name William Tells. While a great administrator in education, Bill’s true passion was creative writing and editing. He was also a bit of an entrepreneur having started up a few small businesses. He lived on the East coast most of his life but he and Joannie moved to Hawaii in the mid 90s. After a few years in the Aloha state, they landed in Southern California enjoying the idyllic weather. They loved their last home in Beaumont, Ca. Built from scratch, the home was perfectly set with the majestic view of the San Gorgonio Pass of the San Bernardino mountain range. From the patio, Bill would often indulge in a libation or two (or three) while tending to his pride of Persian cats. Bill’s nickname, Wild Bill, was not without merit. He loved trying new things. He embraced adventure. And did so with an infectious enthusiasm that was shared with the love of his life—Joanie. As a young man that sense of adventure sent him abroad. And he had stories. Lots of them about his wild and carefree stint in Europe. He was a rebel with a motorcycle. And a man with a hunger. Mostly for a medium-rare ribeye steak and a tall, cold beer. Bill was always there to lend a hand, or an ear, for those near and dear to him. May he continue to soar with that spirit and vigor on the other side. William leaves behind his loving wife Joannie, his daughter Jennifer Simmons, and two grandchildren: Aurielle and Jack Simmons — whom he shared special moments in his final days. He is also survived by Joannie’s three other children and his natural children, Holly and Andy.

William Holley Nicholson passed peacefully in his sleep on June 1, 2021 with his loving wife, Joannie, by his side. He was 83. Bill was born on September 15th, 1938 to Lynn and Roberta Nicholson in Worcester, Massachusetts. Bill had one sibling,... View Obituary & Service Information

The family of William H. Nicholson created this Life Tributes page to make it easy to share your memories.

William Holley Nicholson passed peacefully in his sleep on June...

Send flowers to the Nicholson family.