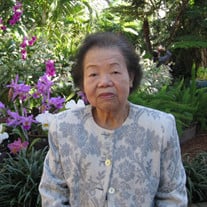 YuehShow Chiou, born August 17, 1923 in SinYin, Tainan County, Taiwan, passed peacefully in her sleep on Tuesday, June 15, 2021 in Providence Mission Hospital Mission Viejo. YuehShow was lovingly known as Ah-Ma to her grandkids. Born to ChiChing Chen and YuanYang Wang Chen, she has three younger brothers JingMing Chen (passed), JungYu Chen, and JinYuan Chen. YuehShow worked as an elementary school teacher and then as a record-keeper for the Tainan County Government Office where she met her husband YingWei Chiou after being matched through a coworker. Six months later, they were married on October 8, 1946 in SinYin, Tainan County, Taiwan. After getting married she became a homemaker for her husband and four children. YuehShow was widowed in 2019, and is survived by her children Ray, Nancy, ChiiFa, and LiYu, her grandchildren Eric, Annie, Loui, Celia, ChingYa, Justin Jau-Chia (passed), Daniel, Vicki, and Casey, and her great-grandchildren Sophie, Elyse, Nathan, Claire, Isla, Amelie, Xavier, Lexie, Abby, Noah, Kaitlyn, Daxton, Maxwell, Alexander, Lyla, and Quin. YuehShow was very good at sewing and would make all kinds of different clothes for herself and her family. She was also an excellent cook who was able to prepare many delicious meals and delicacies for her family to feast on. In 1985 YuehShow and her husband became permanent residents of the United States and would begin to live with their children who had relocated there. Eventually YuehShow would dedicate herself to being a caring grandmother who loved to help raise her grandchildren. She was an extremely considerate and loving grandmother who always made sure her grandkids were well-fed with their favorite foods, looked after, and played with. In her spare time she also enjoyed reading novels and watching cooking shows and Chinese soap operas. YuehShow loved spending time with her family, and she will always be remembered for her warm nature as well as through her many delicious recipes that have been passed down to her family. Services will be held Saturday, June 19, 2021, at 10:00 a.m. at McCormick & Son Mortuaries, 1795 Laguna Canyon Road, Laguna Beach. YuehShow’s ashes will be laid to rest at Rose Hills Memorial Park, 3888 Workman Mill Rd, Whittier.

The family of Yuehshow Chen Chiou created this Life Tributes page to make it easy to share your memories.

Send flowers to the Chiou family.